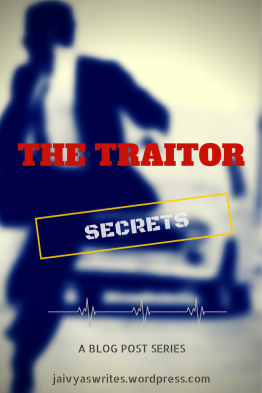 This is Chapter Four in ‘The Traitor Series’. Haven’t read Chapter Three? Want to refresh your memory? Click here to go read it again!

Marco Poole flicked the cigarette butt out of the window of his dark blue Subaru Forester XT which was hurtling towards Houston on I-10. He picked up the black Houston Rockets cap that was frying on the dashboard from the heat and he tossed it into the backseat. A man sat distractedly in the passenger seat beside him. He kept fidgeting with the sunglasses in his hands, repeatedly opening and closing the temples. His eyes would drift to the rear-view mirror every now and again and they would thoroughly scan the road behind before settling on the road in front again. Occasionally he took a sip or two from the water bottle in the bottle stand in the door.
“Are you sure they don’t see us?” He finally asked Marco Poole, with a tinge of concern in his voice.

“No, actually they can see us. There are cameras everywhere. They just don’t know that they should be seeing us.” Marco explained, grinning confidently. “What if they do?” He still wasn’t convinced they were completely safe, and Poole knew he is not to blame for a thing like that. “No one saw our faces that day, Blair.” Blair exhaled audibly and sunk into his seat before pulling the bottle out from its stand and taking another sip.

“What is it?” asked the SAC staring into the computer screen. “Footage outside the ATM, sir. There have been seven transactions from the ATM so far today. Poole’s was the fifth. The car that came to the ATM at around the time of the transaction was a blue Subaru Forester. I can’t get a clear shot of the plate as the car comes in, as you can see here,” he narrated, while playing the footage of the car coming into the lot and stopping, with the driver’s door to the camera.
“There! That’s him,” announced the Shermanator, as the tape showed Poole stepping out of the car wearing a grey hoodie, a black Houston Rockets’ cap, jeans and grey sneakers. He was talking heatedly to somebody on his mobile phone when he got out of the car and put the phone away when he got to the door of the ATM. After about a minute he came back out, placing currency notes into his wallet. As he was pulling his car out, the camera managed to have a look at the number plate on the back of the car.

“There! There! Zoom it right there!” Ellis said excitedly, as soon as the plate came into view on the monitor. The Shermanator had already started zooming in on it before the words were out of the SAC’s mouth. He enhanced the image slightly and he got a fairly clear still of a Houston number plate. “Run that!” Ellis’ pulse was steadily rising, and he expected it to taper off in a perfect high. Six and a half minutes later The Shermanator piped up saying, “Car is registered to Marco Driscoll Poole, according to The Texas DMV. It’s his car, alright.” Ellis proceeded to ask him if the camera footage hinted at what direction the car had gone after exiting the ATM but The Shermanator’s negative reply lead to some more chin-scratching on the SAC’s part. After a minute of thinking he had that look on his face again and The Shermanator was ready to start typing.

“Call our Field Office in San Antonio and the Police Department. Ask them if they have anything on a car of that make, adorned with that number plate,” Ellis directed.
While the Shermanator was patching and switching calls, the other agent asked, “Do you want me to alert Houston Police, sir?” Ellis decided he liked this one as well. “Keep your finger on the button,” he said after a brief moment of looking at The Shermanator.

“Negative, sir. The agents got nothing useful out of the ATM; the police got no sight on the car. Police went through the footage on several streets and they all captured the car’s image as it made its way to the ATM through San Antonio but it isn’t back in San Antonio now.” Weiss was back beside Cross and he was really beginning to enjoy being an agent on a big case like this.

“Alright, I want a chopper in the air and I want two agents on it. Get the chopper to fly over I-10 to Houston and it lands at our Field Office there. Nothing too out of the ordinary, tell them to maintain near-normal airspeed just have altitude a little less in order to get a visual on the car. I want their visual patched through this room. Our ATM guys drive down to Houston on I-10 and if the chopper catches a sight of the car, we relay the information to them. You,” he said, pointing at the young agent who offered to speak to Houston Police, “now call the Houston Police and tell them about the car – make, colour, number, description of Poole, everything. They intercept the car as soon as it gets to Houston, or we do so before it gets to that. In a box by dinner, remember.” Everybody got to work.

Blair Grayson looked at the black blanket that lay on the floor of the backseat. He frowned at the glistening metal underneath it.

“Pass me the water, Blair.”

Blair took out the water bottle from the stand in the door, unscrewed the cap and handed it to Poole. Poole had just taken his second sip, when a shriek left Blair’s mouth.

A light brown coyote with shades of black had run onto the highway, thinking it was the right moment to cross over to the other side. Blair pulled the steering wheel in his direction, forgetting, in the moment, that Poole still had his foot firmly pressed on the gas. The bulky SUV swerved hardly, the screeching of its tires piercing the ears of the car’s two ill-fated occupants. As Blair tried maneuvering the car, Poole’s state of sudden surprise mixed with mortal terror caused him to take his foot off the gas and press it down hard on the brake, forgetting, in the moment, that the wheel was in Blair’s hands. Like it were right out of a movie, the car’s wheels lost contact with the ground for a few fractions of a second, before it came crashing down on its roof and kept rolling towards Houston for a few more seconds. When it finally came to an end, there were six more cars that had piled up behind the battered Forester which now lay upside down. Blair’s mangled body, which due to his carelessness wasn’t harnessed by the seatbelt, had been pressed in between the road, the awfully contorted back of the car, and the front grille of the car that was now pressed up behind theirs. In the front of the car, sometime during the whole episode, Poole had been ripped out of his seat despite the seatbelt and lay on the floor of the car, which was technically the roof, with the upper half of his body outside on the road, in a pool of blood.

A black Chevrolet Tahoe approached the scene after four minutes. The man in the passenger seat just behind the driver’s seat rolled down the heavily tinted windows of the SUV and though he had mask that revealed only his teal eyes, the satisfaction could be clearly seen in them. He pulled down his mask, and with a hint of a smile, he pressed a number on a mobile phone he produced from his pocket. As soon as the man on the other line picked up the phone, he said, “It’s done.” On hearing the reply from the other end, he said with a devious smile, “We didn’t even have to touch them. Turn on the TV, you’ll probably see it.” He rolled up the window and signaled the driver, who quickly shifted gears and expertly maneuvered the car past the wreckage.

Liked Chapter Four? Do let me know down in the comments 🙂

P.S.: Chapter Five will be out by the end of this month.

4 thoughts on “The Traitor: Chapter Four”