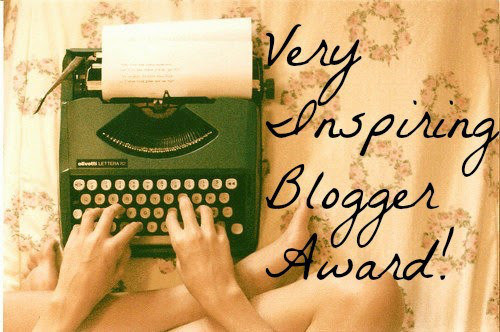 A big thanks to Quizzically Challenged for nominating me for my second Very Inspiring Blogger Award! Feels good to know I qualify as inspiring. Of course, the rules to start off with:

The Stuff I Gotta Answer

Have you ever read any book which made you wish that you wrote it? If so, then why?

A] Oh yeah, I feel that way after practically every good book I read. Why do we read books? Because they give us some sort of information, something that may help us in our lives, something we didn’t know? Sure, all that. But above all, its because the written word is the only thing (apart from the spoken word) which can truly move us, inspire us. So if you’re an aspiring writer like me, if you read a book that moves you in one way or another, odds are you’d wish you’d written it instead, not because of the recognition it would get you, not the money, but what all writers crave above everything else, to move and inspire the reader.

What is your weirdest characteristic?

A] Tough one. Not because I’m not weird, but because there’s too much to choose from. So in school, I used to play cricket and I was on the school team. There was this series of three matches that we had to play with the junior squad of one of the biggest clubs in Mumbai. They were juniors but pretty competitive nonetheless. It was a big one for me since our coach chose me as the team captain. When I went out to bat in the first series, we were not doing well at all. That day I put on my left socks and shoes before the right ones, and we won that match. I did the same for the second match and we won it too. Same for the third. Now, I know that’s baseless superstition at its finest, but I don’t care XD.

Any annoying song stuck in your head at the moment? Or which was the most recent one?

A] There is a song stuck in my head at the moment but it isn’t annoying. The most recent one would be some idiotic song from some idiotic TV commercial, which I don’t even remember right now.

If you had a choice between reading your favourite lesson in your schoolbooks or the worst book you’ve read so far, which would you choose? (and which are they?)

A] I would read the lesson from the schoolbook. It would probably be a tossup between a chapter in my Philosophy textbook or one from the Psychology one, since I like both subjects a lot.

That wraps this up, thanks again to Quizzically Challenged and thank you people for reading through. I’ve got another award acceptance post pending, but after that its back down to business, so stick around for that!