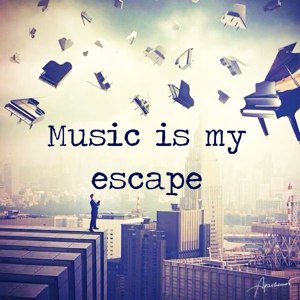 Music. Its too much to be able to describe it aptly in a line or two. It elevates you. It pushes you. It teaches you. It entertains you. It makes you think. Its healing.

Now that I think of it, music is probably the best way of passing time.

So today, I’ve compiled a great list of small snips of lyrics from some great songs, composed by some great people. Enjoy!

“You learn a lot about people when you listen to the songs that mean something to them.” – Unknown

“I was so much older then. I’m younger than that now.” – Bob Dylan; The Byrds, My Back Pages

“If we weren’t all crazy we would go insane.” – Jimmy Buffett, Changes in Latitudes, Changes in Attitudes

“No matter what you do, you’ll never run away from you.” – Paul Revere and the Raiders, Kicks

“But in the end it doesn’t even matter.” – Linkin Park

Aaaand that’s it for this week’s Awesome Quotes! I hope you liked it. There are tons and tons of amazing songs out there with great lyrics but do let me know if I missed something that is just too good.

As always, come back next Friday for more Awesome Quotes 🙂

Hint: Next Friday’s Awesome Quotes will be the first of two parts with a shared theme and will have something to do with sports.

Stay tuned to catch it next Friday! 😀

Criticism – both positive and negative – is a part of life, whether you like it or not. There are always those who do not hesitate before hurling careless pieces of ‘advice’ at you. It takes some grit, heart, and determination to get through times like those. You have to believe.

Okay, enough of the humdrum serious introductions, let’s lighten up a bit here. The last edition of Awesome Quotes was serious enough. This time round, though the theme sounds pretty deadpan, I have tried to make it as humorous and lively as I can. These kind of features can get boring real quick.

So, with a fresh collection of quotes at your disposal, enjoy and get inspired!

I guess we can all agree with that.

“To avoid criticism, say nothing, do nothing, be nothing.” – Aristotle

“Be an encourager. The world has plenty of critics already.” – Dave Willis

“A critic is a man who knows the way but can’t drive the car.” – Kenneth Tynan

“Throughout the centuries, there were men who took first steps down new roads, armed with nothing but their own vision.” – Ayn Rand

This one sounds so much like something Tolkien would say. Add a little upbeat soundtrack and have Cumberbatch read this and you have inspiration on-the-go!

“Oh, you hate your job? Why didn’t you say so? There’s a support group for that. It’s called EVERYBODY, and they meet at the bar.” – Drew Carey

So, stop whining and go have yourself a little session of therapy.

This one is definitely the best of the lot.

Aaand, that’s it for this week’s Awesome Quotes! As always, please comment down below and tell me if you have a cool idea for a future edition of Awesome Quotes and do not forget to drop in again next Friday for the next collection!